UPDATE: I finished 12-2 on the week, earning 94 points... yet only finished tied for 13th for the week. 2 guys in my pool had perfect weeks!

Here are my picks for this week, again using the Aikman Efficiency Ratings and adding 10 to each home team. Previously discussed here and here. I'm a bit nervous this week, as even with the home weight there are still nine road teams favored to win - it would have been twelve if not for the weights. In the NFL, the home team is 75-39 this year, which would be about 9 of 14 in a week like this - not 5. Ah well... here we go:

That's right, 12 on Peyton Manning's Colts against the Patriots on Monday night in New England. I should probably switch systems, but seeing as this happened last week (and a tie the week before), I keep the faith. :)

11/6 UPDATE: Overall, not a bad set of first games, losing just my 1 and another game. Unfortunately, I had Detroit for 10, so I'm back in the middle of the pack. 4 guys (out of 31) are 8-0 so far, which I believe only one guy had done until now this season. They all have different picks the rest of the way, however, so only 1 can finish with the max 105 points. I'm winning 3 of the late games at halftime, and the other one is tied. Not bad. I doubt I can win this week, but I'm too lazy to figure it out now.

LATE GAMES UPDATE: I won all of the late games, and I can't win the week. But overall, a pretty good showing so far.

Gratuitous shots of Cleveland Browns Stadium, which I took over Sukkos: 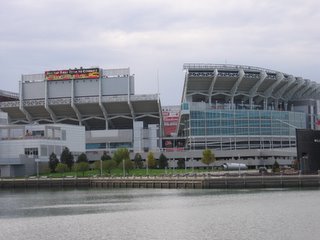 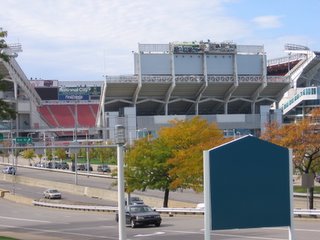