This Sunday was my grandmother Hilda Goldish's a'h stone setting in Cleveland. I wasn't able to attend, but I did enjoy the two brief speeches from R' Naphtali Burnstein (YI of Greater Cleveland) and my father, particularly when my father discussed what my grandmother was all about - and when listening to it, it's striking how it's so simple in so many ways. 'If only!' people would just use (/would have just used) their common sense, then most everything would work out - remembering, of course, that "timing is everything".

Most of all, it's hard not to notice that so much in life comes down to what each of them stood for and what is said so beautifully on each of their headstones: Honesty and Common Sense. 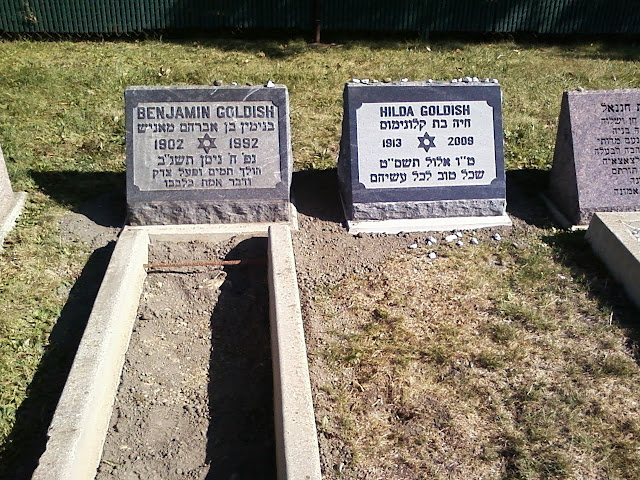 Posted by Unknown at 9:37 PM No comments:

Take a look at this tweet, and, for a second, marvel at the absurdity of it.

To all my christian brothers and sisters, especially catholics - before u condemn muslims for violence, remember the crusades....study them

This is on par with the stupid comment Tavis Smiley made regarding the Columbine Murderers being Christians. Doesn't this just typify the left? Is it something reflexive to the left to defend Islam or is it more to condemn those that dare to condemn Islam?
Posted by Holy Hyrax at 1:34 PM 3 comments:

During a game against Austrian club FC Red Bull Salzburg, Hapoel Tel Aviv's Itay Shechter scored after a very nice run, proceeded to pull a yarmulke out of his sock, (apparently) said a prayer—and was immediately given a yellow card.
Update: Per commenter OutKukoced:


According to this article in the Israeli newspaper Maariv (in Hebrew), people were chanting "Go to the gas chambers" in the first half (as heard by one of the team owners). [www.nrg.co.il]
According to this interview (sorry, it's in Hebrew) with Schechter [www.haaretz.co.il] the celebration was, however, not a reaction to anti-Semitic chants, as he did not hear any by that point in the game. He says, however, that afterward (unclear if he means after the game or celebration), he was made aware of the anti-Semitic insults from the stands. According to him, he was given the kipa by a fan for good luck at the airport, and decided right before the game started to keep it in his sock and take it out if he scored.
So, yes, there were anti-Semitic chants going on (par for the course at European soccer games), but no, the celebration was not a reaction to the fans.
And thus ends Kipa-gate.

Posted by Unknown at 9:56 PM No comments:

The NY Times Magazine last week had a very interesting article about 20-somethings and why they take so long to grow up. The basis is that there is a newly recognized stage in life called 'emerging adults', where they make some of their own decisions but defer others to parents or society. It is long but worth the 30 minutes it may take you to read it (that's how long it took me).
Here are some points I liked:


If society decides to protect these young people or treat them differently from fully grown adults, how can we do this without becoming all the things that grown children resist — controlling, moralizing, paternalistic? Young people spend their lives lumped into age-related clusters — that’s the basis of K-12 schooling — but as they move through their 20s, they diverge. Some 25-year-olds are married homeowners with good jobs and a couple of kids; others are still living with their parents and working at transient jobs, or not working at all. Does that mean we extend some of the protections and special status of adolescence to all people in their 20s? To some of them? Which ones? Decisions like this matter, because failing to protect and support vulnerable young people can lead them down the wrong path at a critical moment, the one that can determine all subsequent paths. But overprotecting and oversupporting them can sometimes make matters worse, turning the “changing timetable of adulthood” into a self-fulfilling prophecy.

[A 25 year old commenting] “to think about all the things I’m supposed to be doing in order to ‘get somewhere’ successful: ‘Follow your passions, live your dreams, take risks, network with the right people, find mentors, be financially responsible, volunteer, work, think about or go to grad school, fall in love and maintain personal well-being, mental health and nutrition.’ When is there time to just be and enjoy?”

And in case you thought Kollel support only exists by frum Jews:


[..] asked parents of grown children whether they provided significant assistance to their sons or daughters. Assistance included giving their children money or help with everyday tasks (practical assistance) as well as advice, companionship and an attentive ear. Eighty-six percent said they had provided advice in the previous month; less than half had done so in 1988. Two out of three parents had given a son or daughter practical assistance in the previous month; in 1988, only one in three had.

For a comforting conclusion:


Arnett would like to see us choose a middle course. “To be a young American today is to experience both excitement and uncertainty, wide-open possibility and confusion, new freedoms and new fears,” he writes in “Emerging Adulthood.” During the timeout they are granted from nonstop, often tedious and dispiriting responsibilities, “emerging adults develop skills for daily living, gain a better understanding of who they are and what they want from life and begin to build a foundation for their adult lives.” If it really works that way, if this longer road to adulthood really leads to more insight and better choices, then Arnett’s vision of an insightful, sensitive, thoughtful, content, well-honed, self-actualizing crop of grown-ups would indeed be something worth waiting for.

I could only theorize about this impact on our community, but you are free to make your own conclusions; recognizing that singles may actually want to be that way a little longer, that they want to develop themselves and careers before a family. Of course that we as a community would have to recognize a developmental stage between adolescence and ready to get married, would really wreak havoc with our  understanding of Jewish life as it is. It would mean accepting a single and not treating them as second class citizens, something that people like Bad4 only theorize about.

Hat tip: Buda. There are a few videos from this performance - this one is apropos, after seeing my sister, brother-in-law, three nieces and a nephew off to make aliyah today. This is from the 1992 Hebrew Academy of Cleveland boys choir (I don't see myself, and I can't remember if I was in it or not, but a large number of my classmates and people from the grades just above mine are). I believe Yudi S. is the videographer and the one who posted them to YouTube - thanks!

For everyone else - enjoy, and admit it - those glasses were Awesome.

So, My Sister is Making Aliyah Today...

...that's pretty crazy. Vervel and BIL and their four kids are on today's Nefesh B'Nefesh flight as they make their way to their new home in Rechovot from Baltimore (they took a bus with 4 other families this morning from Baltimore to JFK. My parents are in from Cleveland, and we're all headed to the airport now to see them off.

They'll be reading this later, so feel free to send your good wishes/advice/welcome them to Israel in the comments!
Posted by Unknown at 10:09 AM 5 comments: