...and she has no shame. Is anyone surprised? Government money is like heroin. It's not easy to willingly give it up when it goes against your personal interest.
here
Posted by Holy Hyrax at 5:17 PM 3 comments:

A couple funny takes on current events in Israel these days: A brilliant costume, and a series of "kids'" stories (below).[Hat tip: R' Gil and Jameel and others] Also worth reading and listening to, Netanyahu's speech at AIPAC, particularly the last couple of minutes, including his reading of a WWII letter by the US regarding not bombing Auschwitz, and a mention of Esther HaMalka.

Purim 2012
The Fanat in the Hat and Other Stories
Eli D. Clark
(with apologies to Dr. Seuss)

THE FANAT IN THE HAT

I sat there with Sally.
We sat on the bus.
We sat there together.
No one made a fuss.

Then who came aboard?
The Fanat in the Hat!
And he said to us,
“How can you sit like that?

“You know it is wrong
To sit next to each other.”
I said, “She’s my sister,
And I am her brother.”

He pointed at Sally,
“Go back there to sit.
If you stay in front,
I think I will spit.

“I do NOT want to see you
Go out or come in.
Your elbows are showing
And making men sin.”

“I paid for my seat
Just like you,” Sally cried.
“I can sit where I want!
It’s for me to decide!”

“Where do YOU think you are?
This is not Tel Aviv.”
The Fanat in the Hat said,
“Sit in back or you leave.”

“Now do as I say,
You loose woman, you.”
Then out from behind
Came Thug One and Thug Two.

They had beards, they had hats,
And they wore black and white.
Their fingers were curled
Into fists that were tight.

They were big, they were mean,
And they blocked our way.
They did NOT look like men
Who learn Torah all day.

They screamed at poor Sally.
“Prutzoh!” they shouted.
“We will take care of you.”
And we did not doubt it.

We looked up to heaven.
We looked left and right.
Should we try to run
Or stand up and fight?

We needed a plan,
A way to escape,
Before those two Thugs
Squashed us both like a grape.

Then Thug One and Thug Two
Shouted, “Oy! Help us please!”
The Fanat in the Hat
Just fell to his knees.

We looked and we saw
A giant black cat,
Walking erect
In a red and white hat.

The Cat in the Hat
Looked the Thugs in the eye.
“These things need to stop.
And I’ll tell you why.

“Scaring young women
Is not a good game.
Worse, it is causing
A Hillul Ha-Shem.

“Here is a new game
To play,” said the cat.
“The game is called boxing.
Are you good at that?”

The Thugs said, “We box.
When we finish with you,
You will lie on your back
For a week or for two.”

The cat pulled a box out
And opened the top.
We heard a big VOOM
That made everything stop.

The Fanat in the Hat
And the Thugs in their beards
Were sucked into the box.
They all disappeared.

The cat closed the lid
And sealed it with glue.
“Goodbye,” said the cat,
“And good riddance to you.”

The cat said to us,
“You can sit as before.
Those three nuts will not
Bother you any more.”

“Oh, they will,” Sally said,
“For good or for bad.
Those men in your box
Are my brothers and Dad.”

GOWN
BROWN
Her gown is brown.
Brown makes us frown.
The brown gown must leave town.
BLACK
BACK
If she wears black,
She can come back.

HOP
POP
Sukkah-hop.
Ate non-stop.
Drank some pop.
Ate a giant lollipop.
And a pound of lemon drops.
My Pop took a strop
And gave me a clop.

LATE
WAIT
My date is late.
I wait and wait.
The cake is great.
Oh, how I ate!
I am overweight.

DRINK
SINK
Do not drink
From the sink.
The water has bugs, I think.

WALL
ALL
The Western Wall
Is open to all,
Short and tall,
Except for a woman with gall
in a prayer shawl.

HEAR
CLEAR
We hear the shiur
From Rabbi Greer.
The shiur is clear.
After shiur
I drink a beer
And fall on my rear.

GET
YET
She will not get
Her get yet, I bet.
She first must offset
Her ex-husband’s debt.

FRED
RED
HEAD
See Fred.
See the redhead.
A pretty co-ed.
She is pre-med.
Very well-read.
Also well-bred.
Now they are wed.
Her pretty redhead
Has a sheitel instead.
Fred feels misled.

PAY
DAY
SAY
If you pay
In cash today,
I save tax. What do you say?
Okay?
Hooray, hooray!
Sorry, I cannot stay.
It is time for me to pray. 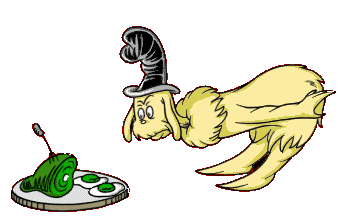 Do you eat green cheese and ham?
I do not eat them, Sham-I-am.

Would you eat if no one saw?
I could not, would not break the law.

If a Jew turned on the gas?
If the dish was made of glass?
What if I would serve it cold
To kids below 13 years old?

We cannot eat green cheese and ham.
It’s in the Torah, Sham-I-am.

If the cheese is neufchâtel
Made from Cholov Yisroel?
If the workers making it
Come from the Chief Rabbinate?

But THIS ham is just a sham,
Made of soy, said Sham-I-am.

Tell me, please, cooked soya bean –
What is done to make it green?

What I do, said Sham-I-am,
Is add some peas and one fresh clam!

Really interesting to see this - from how it was built up to the hilarious name of Adloyada for the carnival (Ad d'lo yada is a term for how on Purim people should reach the point of not knowing the difference between Mordechai and Haman) to the growing concern about Nazi Germany to the national groups and companies that still exist today, 80 years later.

Posted by Unknown at 1:16 AM No comments:

A couple older posts and a newer article as I catch up on reading:

Email ThisBlogThis!Share to TwitterShare to FacebookShare to Pinterest
Labels: Roundups

Thanks to the discussions in the comments on posts below this (thanks Vox!), I think I realized what I believe is a dynamic difference between Santorum's approach and the approach of others to the contraception issue, even as people tend to think they're one and the same.

Specifically with the contraception issue, the argument most religious groups made was that it was an encroachment on their religious freedoms, forcing them to perform an action which was morally wrong to them (or for some groups, like Jewish ones who have no issue with birth control, simply that it was encroaching on religion in general). In other words, they're implicitly agreeing that government can make certain regulations on behalf of the people as a whole, assuming they are acting in the interests of the people. [And there are other groups who disagree with that basic premise in general.] It just happens to be that in this case that public interest is trumped by the interests of religious freedom - something people on the left disagree with.

Santorum, however, is making a different argument: Whether or not one feels that government interests should trump religious ones, and perhaps even if one would agree to that, in this case the government is actually acting against the interests of the people it is trying to protect and assist. It is his belief that birth control actually harms women (and men and particularly children) because of the consequences of living in a society which has birth control readily available. This is not an argument about government intervention or government interference with religious freedoms in Santorum's eyes; it is an argument specifically as to the merits of the intervention which is being proposed.

[Note: I don't necessarily agree with the various opinions, just find them interesting.]
Posted by Unknown at 12:38 AM 2 comments: