I've always liked taking pictures of menorahs, especially when I can catch their reflections in the glass. This year is no different. The menorah I'm using this year is actually my father-in-law's, which they gave us last year because I don't have one. I received a stunningly gorgeous silver menorah for my bar-mitzvah which I loved, but I don't have it. Why not? Well... 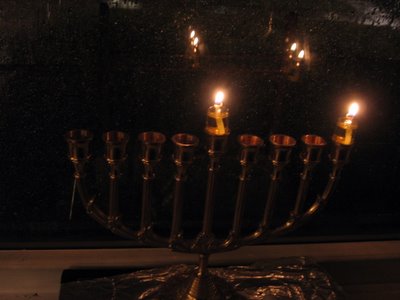 Every year in high school, almost every single person in WITS would head home for Shabbos Chanukah, which was an extended err, out-Shabbos. There were usually a handful of guys who would stay - so few that the sons of the rabbeim would outnumber us. The primary reason I would stay: Money. Who can afford the $140 flight to Cleveland for a weekend? (Apparently, everyone but me... but that's their problem.) Plus, there's the crazy amount of snow; the shlep; and the pointlessness of it. A short weekend cooped up in a snow zone is not something either me or my parents wanted - especially as a high-schooler. 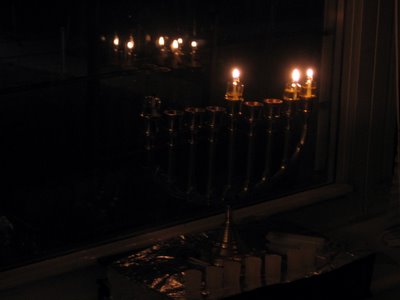 The first couple years I was there, there were a few older guys there whom I was close with who stayed as well. We had an all-around great time, playing football on the frozen tundra of the WITS front yard, making pizza and fries, and just "cooking" in general. The fry-making was especially cool, resulting in the most incredible fireball I've ever seen - the burst of light and heat so large that a guy walking out of the kitchen, facing the other way, ran back in to ask if the fries guy was all right in the back portion of the kitchen. Figure he saw a reflection of a fireball that was 30 feet away, to his back-left, around a doorway [through a wall]. I just remember seeing a blast of light and a clatter and running in to see if he was okay. Lesson learned: Less oil.

Each year, though, less and less people would stay. One year, I was invited to a couple friends in Milwaukee, one in Glendale, one on the West Side. It was really nice, and I had a great time. I finally saw Braveheart; I saw Star Wars: Episode I; and I finally had my first steak. Yes, that said "first". Growing up, I was apparently convinced of the incredibly obvious fact that I didn't like meat, thereby saving my family many hundreds of dollars. Lesson learned: Meat good. Make man big and strong. I also had the distinct pleasure of being in my friend's Rav4 after what for Milwaukee qualifies as a big snowstorm. He'd just received his license. The car started to skid, and my completely moronic friend slams the brakes. We plow right into a snowbank on the side of the road, and I give him a nice little speech about how to drive in snow. Lesson learned: Don't let friends drive dumb.

Finally, my senior year, I decided to stay again, despite there being just 2 other people in the entire yeshiva doing so. Both of whom happen to be in the Beis Medrash, and both of whom happen to live in the "coachouse", which used to be a coachouse. Which of course leaves me in the main building, a more than 50 thousand square-foot monstrosity, half of which used to be a convent, and the other half all industrialized and new; a one hundred year-old mansion with mysterious cabinets and hollow shelves, with strange fireplaces and a non-functioning dummy elevator, and with strange 15-foot high stained glass paintings of Mary and who knows what else hidden behind deep red curtains; a deathly quiet shell just a few hundred feet up a forested, rocky hill from the shores of Lake Michigan which normally has 130 people in it... all by myself.

Sweet!! Music blasting everywhere (stations in Milwaukee are pretty good!), dancing around wearing whatever the heck I wanted to, and staying up as late as I wanted without getting 3 hours of detention from Rabbi R. And all the leftover pizza I could handle. I was living it up. Except every stinking creak I heard would freak the heck out of me for a while, and dancing around gets pretty boring after a couple hours by yourself. Thankfully, we went to two or three Bucks games that weekend ($5/seat I think), including one time where the scalper was bidding against the ticket agent AT THE BOOTH. The lady behind the counter would say a price, and he'd offer similar tickets for a couple bucks less. About a week later, there was a huge scalper bust. Lesson learned: Don't scalp tickets right next to the booth.

Anyways, back to the point. Because I knew every year that I would be one of a select few to be in school, I decided to bring my real menorah. Every year, when the yeshiva would light, there would be numerous little, cheap, throwaway menorahs, plus a few real ones that were okay - and then there were a select few truly beautiful ones that really stood out on the table. For me, who would not be going home at all, this was my little enjoyment of Chanukah. Each year, a few people would comment on how nice it looked, and that it was nice to see amongst all the wax burnings and upside down soda cans (a personal favorite!). Senior year, the new General Studies Principal took fabulous pictures of the menorahs and their reflections - and mine was prominently displayed. Seeing that beautiful silver menorah always brought a smile to my face.