Warning: This is Not a Toy 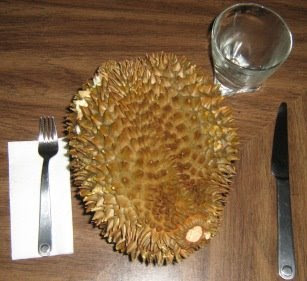 Have you ever hosted the sort of holiday guests you wished would go away and never come back? This Rosh Hashana, you can drive them away with a simple, Southeast Asian shehecheyanu fruit: the durian mornthong (alt sp: monthong).
Only minutes after you slice this fresh delicacy open, your guests will exit your home through the nearest aperture with astonishing rapidity. The only downside to this strategy is that you may be tempted to follow them yourself.

A small expedition that included bored bloggers Scraps and Bad4 headed into looking for something interesting to eat and came out with, among other things, this rare and virtually unknown fruit. As far as entertainment went, it got five stars. The gastronomic experience, though... We'll get to that.

The durian mornthong looks a bit like a horse chestnut the size of a human head but is about half as heavy (as a head) at 4 - 8 pounds. Unbelievably, they grow on full-sized trees. The exact fatality rate for people who nap in their shade is unknown.

It is also unknown (to us) if the Chinese really eat them, or if they just hang them up outside their grocery stores in Chinatown to lure curious Americans so they can tout the fruit’s sweet, delicate taste, and then collapse behind the counter in a hysterical fit of giggles when the tourist walks off with 7 pounds of mornthong at $1.20 a pound. (We pretty much did that.)

Once a durian mornthong is purchased, good luck getting it home. Durian mornthongs do not cuddle well, being covered in sharp woody spikes. Handling can be difficult for those who aren’t used to sleeping on a bed of nails. Purveyors customarily tip it into a regular shopping bag, after which it is the customer's problem. People who have purchased durian mornthongs are easily discerned from the crowd by their pained expression every time the bag bumps their leg and gouges little holes through their clothes. Which is about every other step.

Like many prickly personalities, the durian mornthong is all softness i 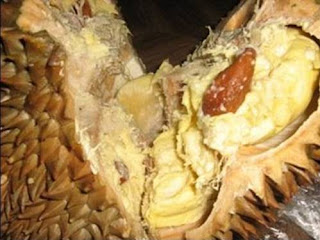 nside. Cut open, it looks rather like a brain in a skull – not a regular brain, but more like the “this is your brain on drugs” kind of brain. The flesh has a scrambled-eggs coloring and a scrambled eggs appearance when disturbed.

Each “lobe” of the durian mornthong “brain” is a delicately membraned sac of thick, pale yellow cream—rather like a large egg yolk—around a smooth, brown seed. The seed actually looks a lot like a chestnut, so maybe a durian mornthong is what happens when a chestnut tree takes steroids. The cream has been compared to custard, a comparison that is exceedingly apt. The flesh of the durian is exactly like custard, except that custard is less slimy, less smelly, and goes down much more easily.

The fruit’s odor is not immediately apparent. It kind of sneaks up on you and then won’t leave. Most people stick their nose into the shell, sniff, and say “I don’t smell anything… wait, maybe there’s something?” Then they sniff again and say, “Yes there is, but it’s not so bad… ooh wait - maybe it is!” The scent is pungent and penetrating. Three shopping bags cannot mask its unique and flavorful scent, which fills the room and creeps beyond at a dismaying rate. If you ever wanted to know how the malodorous homeless feel when everyone crowds to the other end of the subway car, take an opened durian mornthong onto the train. In many parts of Southeast Asia, durians are officially banned from public places. 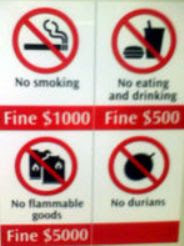 If the fruit is opened carefully, you can remove a whole sac and, theoretically, suck the thick cream out of it at your leisure. Theoretically because we couldn’t find anyone to try it. All in our expedition were quite happy with a small taste and preferred not to lick their fingers clean. It’s not because it isn’t a sweet fruit – it is. But, as a Younger Sister declared, taking her second knifeful, “It doesn’t taste so bad at all. It’s just the smell and the consistency that sort of… oh, eugh. Quick – pretzels!” Let’s just say it gets overwhelming fast.

In our professional opinion, the durian monthong has about four really practical uses, none of which involve the human digestive system except the last.

Durian mornthongs are currently selling on at the edge of .