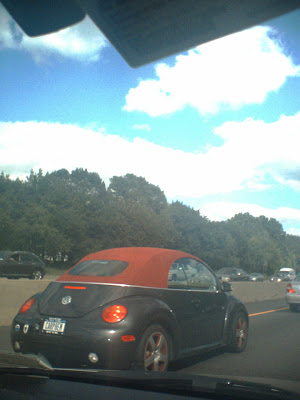 This license plate was seen while driving on a highway in New York. At first glance, it appeared to say "Carpe Diem" which, for those who don't know (or for those who have never seen Dead Poets' Society), means "Seize the Day" in Latin. This was what initially caught my eye about it, but it wasn't until I got closer that I saw what it really said. Carp8em. Huh?! Sounds boring at first, doesn't it? Until you say it out loud (go on, say it) and realize what it's actually saying. A carp actually ate "Them" (whoever "Them" is)!

I think we can take a lesson from this, especially at such an introspective time of year. We have many choices in life, but one of them undoubtedly is, will you seize the day? Or will you be eaten by a fish?
Posted by Erachet at 5:21 PM