Mommy! There's a Monstera on my Plate! 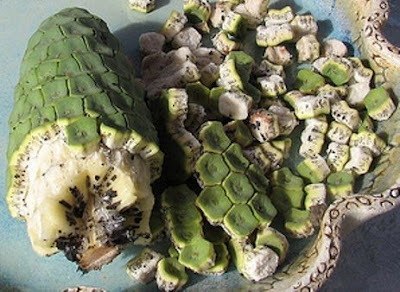 Consider, my friends, the monstera fruit. Yeah, I know. With a name like monstera deliciosa, you gotta believe that it’s either some weird result of a genetics lab experiment, or it was discovered by a botanist with a bizarre sense of humor.

Let’s start with the tree it grows on. It doesn’t. The monstera plant is a bit creepy. Unlike most sensible plants, it grows toward the dark. Then when it finds the source of the shade (generally a tree), it changes tack and starts climbing it toward the light.

If the monstera vine sounds like something you’d never see outside of darkest Africa, or maybe Brazil, wrong. It happens to be native to Panama, but you can find it much closer to home. Next time you’re dating in a hotel lobby, check out the flora. According to the holy grail of accuracy, Wikipedia, monstera plants are popular in hotels because of their thick, luxurious foliage. But without real sunlight, the monstera won’t put out any of its fruit – which is ok, because that would probably scare the guests away, or at least give the daters something to talk about.

The monstera fruit looks like a banana coated in green pineapple-style scales. Like all monsters, it has its teeth: if you try to eat the monstera before it’s ripe, the oxalic acid it contains will burn your throat and poison you. Which could be uncomfortable.

The monstera is ready to be eaten when it starts to shed it scales. Quite frankly, it’s gross. The dusty green scales just pop off and fall all over, leaving smudges on the exposed banana-colored flesh underneath. Under each hexagonal scale is a hexagonal division of fruit. They’re packed closely together, keeping the banana appearance, but when you bite into it, they come off more like corn-on-the-cob. The consistency is a cross between pineapple and banana. The flavor isn’t bad, at first. It has a pineapple tartness and banana creaminess, but there’s also a spiciness (oxalic acid?) and a heaviness that make you slow down and wonder if it really tasted good at first or if you imagined it.

Fairly decent in small doses; serve the hexagons off the cob, and don't show the guests the monster until after they've swallowed.