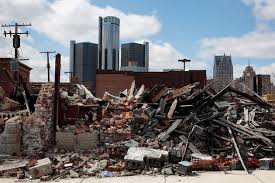 As a native - and now current - Clevelander, an old joke is that however bad things might be in Cleveland, "Hey, at least we're not Detroit*." And certainly, that joke is even more apropos this week, after Detroit applied for bankruptcy. While it would be easy (and entertaining) to write about this from a political point of view (particularly to fisk Krugman's pathetic dismissal of it, done already here), it is more useful and instructive to learn something from it, instead, whether as individuals, families, or communities.

The key lesson: Don't be Detroit.


It is impossible to stress enough the difference between those who pay for the future now and those who pay for now with the future. While the first group may not have all the luxuries of the second group for the first few years, they will also not have the stress, poverty, and decay of the rest of the years. It's the difference between buying a mansion off the bat, but not being able to keep it up, vs. buying a modest house and continually upgrading. In the beginning, the person with the mansion may seem better off; but within a few years, they have a big, run-down house, while their friend keeps expanding and enhancing.

Be smart, be frugal, and plan. Don't be Detroit.